Protection of a private villa

Requirements of VIP private customers are very individual.
As a rule, video images from the cameras should not be accessible without hindrance – not even by authorized persons such as a security guard. The freedom of movement must not be restricted and often surveillance measures should be placed discreetly and inconspicuously on the property.
Such requirements are initially contrary to the usual applications of security technology.
The siren on the outside wall indicates that surveillance is being carried out here. Cameras on the property boundaries indicate in which areas surveillance is (or is not) taking place. The traditional intrusion alarm system is either armed or disarmed. There is only “the alarm” – a pre-alarm is not provided for according to current guidelines. Video cameras are actually only installed to document the surroundings, as only in a few cases are appropriately trained security personnel sitting behind these cameras and observing the property around the clock.

Let’s look at a possible attack scenario:
The fence, the first hurdle for the potential intruder. Correspondingly stable and high, it should not be easy to overcome by a standard ladder; “climb over” and “guide” should be reliably detected and reported as a pre-alarm. Within a few seconds the perpetrator has covered large distances on the property. At WARNING we calculate 10 to 15 seconds to cover a distance of about 50 meters in open field. Usually, in private areas, the building is reached after 20 to 30 seconds.
On the way to the building, the perpetrator crosses large areas of the garden property at a rapid pace – and is reliably detected by concealed light barriers. Thus, in the perimeter area, a “pre-alarm” becomes a “confirmed alarm” – several independent technologies have detected a “perimeter breach” even before the perpetrator can reach the house.
The acoustic alarm is triggered – time for the family to retreat inside the protecting building.
Windows and doors are closed, the stable roller shutter is lowered automatically. Of course, doors and windows are reinforced accordingly; according to the customer’s perception of security, a selection was made from the available resistance classes (RC1 to RC6).
The masked perpetrator has now arrived at the building shell. The surrounding cameras have detected him, the video analysis software has already transmitted an image of the perpetrator including video sequence to the permanently manned position (security service). In addition to the confirmed alarm about the perimeter breach, the guard service now receives the first images of the object just a few seconds later – for fast processing and situation assessment first in low resolution, then shortly afterwards in high resolution.
Now the perpetrator tries to penetrate the reinforced outer skin of the building. 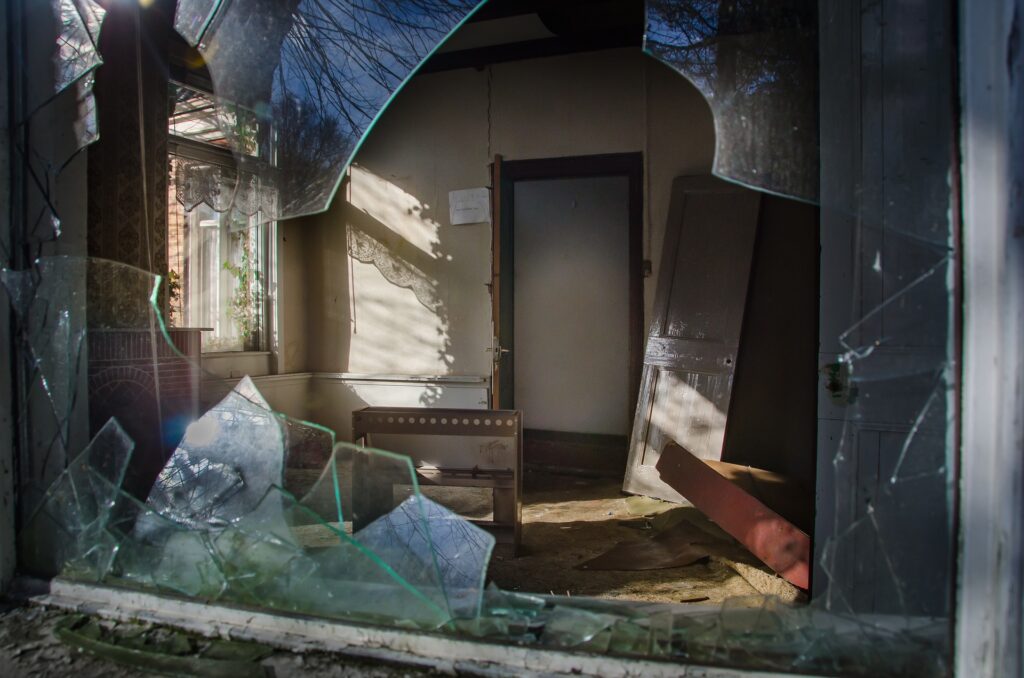 The mechanical securing of windows and doors is a proven means of extending the resistance time of building envelopes or accesses.
Unfortunately, mechanics is not always predictable – because force always leads to corresponding counterforce. For years now, offenders have been coming up with increasingly radical methods of successfully overcoming mechanical measures by using more force or other, additional aids.
Our offender here, however, sticks to the guidelines and tries to overcome the pane with a hand axe according to the requirements of the applicable guidelines. After several attempts he is successful. He reaches through the window and opens the patio door.

Our family has meanwhile moved into the prepared retreat. The communication line to the police is up and running, and the security service also reports at regular intervals on the movements and actions of the perpetrator.

It is now 2 minutes since the confirmed alarm.

The police command is on its way. There are only a few minutes left until the scene with our family. But the perpetrator is already in the building. Only a few meters separate him from his family, the means of resistance seem to be almost exhausted. Only the last door of the retreat room separates the family from the perpetrator, whose motive they do not know.
Another security barrier is now activated: within a few seconds the area in front of the shelter is flooded with artificial fog. It is impossible for the perpetrator to see the surroundings; in addition, deafening noise is heard, robbing the perpetrator of another sense. He hears and sees nothing more! The door to the retreat room, which was clearly visible just a moment ago, has disappeared.
PANIC! RETREAT!
Like a frightened animal he gropes his way in the direction he supposedly knows. Back again – out into the open. The goal to be reached, almost within reach, recedes into the background of his motivation. He flees – police sirens sound in the background.
He has failed.

What reads like a detective novel, in the real life of a security company, is only one of several possible attack scenarios that we discuss and debate with our clients in the run-up to a project.
Scenarios like these and many more – unimaginable, sometimes almost ready for film – have been experienced by our installation partners and us in over 60 years of market presence.

It is time to take the right security measures against the potential attacks of our time.
We are glad that we are allowed to support our customers in this.

WARNING | We protect. Far beyond the Standard.